My mom and dad had insisted on keeping Shayne, and we agreed.  I quickly thanked everyone for coming, and said my good-byes.  I could see both Kayla and Aisha with many questions on their minds, and so I promised to call as I stopped to hug each one.  Moments later, we were alone.  The short walk to the car felt like a long walk in a park.  We held hands, but did not begin to sum anything up with words.  Actually, I didn’t have any words.  As we began to journey, I began to dream again.  Jeff and I were still holding hands.  It was too scary for me to let go just yet.  There was still so much that needed to be said, but perhaps we were both searching for the words.  Then, came the break in the silence we were both wanting.
“How’d you like the book?”
“It’s your best yet.”  I had long caught up on all of Jeff’s writings.
“You think so?”
“I know so.”  I assured.
“So what’s next then?”  Jeff had made quite a departure, and probably did write himself into a bit of a corner.
“How about, ‘The Last Man I Wanted’ by Ketly Dunbar.   I projected myself into the future.
“You do know that I didn’t come this far, or pull you this close to let you go, right?”  Jeff asked and answered my questioning all together.  He looked over at me.  I nodded but did not have the guts to say yes.  Just then we took a sharp turn, and I knew where we were.  It was not where I’d thought we’d be.  I’d been in the area once or twice before, but only for work functions.  We took a few more turns and came to a quiet residential street.  A couple of the homes were being blocked by a large moving truck.  Jeff swiftly maneuvered around the truck, and pulled into an empty drive way.  Suddenly I could see that the movers were offloading the things from the truck into the house where we were parked.
“Is this real?  Does this mean what I think it means?”  I wanted to scream out loud, but I was still cautious.
“Ketly, I’m sorry I hurt you.  I know there’s a lot of trust to be built, but I never thought I could love like I love you.  Jeff was completely facing me now, and holding each of my hands in his hands.  I wanted to wipe the tears from my eyes, but Jeff’s hold was firm and I knew better than to let go.  So, I didn’t.  But then he did.  He released my left hand and reached over into the small cubby, in front of the gear stick, and pulled out a small box.  I quickly covered my face.  The moment was more than could be imagined.  I could hardly look at Jeff.  I felt as though I needed a veil.
Yet even if there had been one, the words I’d so longed to hear would have cut through—for they were sharp and decisive.
“Ketly, would you marry me?”  It was not the novel I’d written in my head.  It was simple, honest, and true.  I’d never thought of it this way, but it was my dream asking me permission to come through.
“Yes.”  I uncovered my eyes.
“Yes today, tomorrow, and forever.”  I continued.  Jeff hung his head, and forgot in the moment or for a few moments to place the ring.  He’d gone beyond his reach.  He’d forced growth, and the payoff had stunned him.  Finally he did, and I was impressed.  I thought it was beautiful, but the promise was more impressive.  We reached forward and kissed each other for the first time in a long time.

When we finally made it inside, I was full—too full to gorge over the details, but it was a beautiful four-bedroom house with all modern fixtures and appliances.  It had already begun to feel like a home, with all the things that were being loaded in.  It felt like I could come and live comfortably with just the clothes on my back, but that was just a moving thought.  I certainly had things I’d plan on bringing with me.  We left the movers to finish their work, and headed off to have lunch.  That night I did not go back to my condo, nor did I for two more nights.  It wasn’t like it had been before though, something had happened and sex became an afterthought.  Neither of us made a rule of it, but it had made a rule out of us both.  I did know however, that the next alter call between us would be sooner than later.

I’d finally finished going through my belongings, and packing what I wanted to take with me.  I’d decided not to take many things, and we were able to use a small truck to move me.  I donated lots of books, my TV unit, and the dining table on which I’d written all of my books.  I remembered not to let go of my copy of “Any Woman I Wanted”, and carried it with pride.  When everything was in the truck, Jeff came back for Shayne.  I asked for a few moments more, and stayed back to take in the reality of a chapter that had ended.  I’d only planned on renting and not selling my condo, but I knew that I wouldn’t lay my head there again.  I was satisfied with that thought, and made my way out.

I hadn’t seen or spoken to Raina since a week earlier, and thought to knock at her door before I left.  After many knocks, and a few minutes, she emerged.
“Hi Ketly.”  Raina offered flatly.
“I was hoping you were here.  I wanted to say good-bye.  I’m moving out.”
“Just like that?  Not a single call or concern, just good-bye on the day you’re leaving?”  Raina’s tone was somewhat harsh, but mostly hurt.
“Raina you left.”  I took the easy road.
“And if I hadn’t?”  She was younger, but she was no push over.
“I didn’t plan it Raina.  You knew where my heart was.”  I felt her pain, but could not regret any of it.
“What about Shayne?”
“You’ll always be his God mother Raina.”
“And what does that mean?”  It was a good question.  When I had appointed her, I was sure I knew what it meant, but now I couldn’t quite give an answer.
“Look, I have to go.  Jeff’s waiting.”  I knew my time had expired.
“Okay.”  Raina sucked it all up, and offered her most forgiving okay.
“I’m sorry.”
“Don’t be.  I already knew you weren’t.”  Raina was honest.  We hugged each other tightly, and then I heard her say.
“You better go.”  And I remembered why she was a friend.

I made it to the car, and I couldn’t look at Jeff.
“That’s it, right?”  Jeff asked in a certain type of a way, and I realized that he knew about Raina.  I looked up, and without a second thought, I responded.
“I promise.”
“I rearranged my whole life for you Ketly.”
“I know.  Please, don’t do that.  Don’t dangle it in my face.  Give me a chance.  I won’t hurt you.  I promise.”  I pleaded.
“Okay.”  Jeff’s okay was almost identical to Raina’s okay, and suddenly it seemed that all the weight of our success, or not, was rested on me.  And just as things began to feel off-balanced, Jeff reached out, grabbed my hand, and balanced the weight. 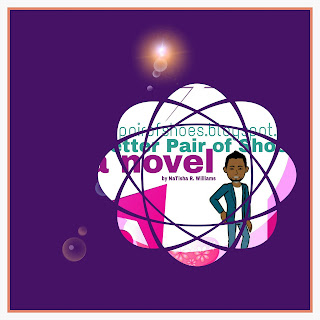