About "The Final Chapters"

Welcome to A Better Pair of Shoes, a novel “The Final Chapters”!
beginning July, 14th
I hope you’ve been enjoying this Suspended-Release Novel.  If this is your first stop here, I encourage you to begin at the beginning.  I’m author/blogger/speaker NaTisha Renee Williams.  A Better Pair of Shoes is a book which transforms with each and every chapter.  The story is written as a continuation to my novel, Renegotiating Kayla, but is also written to stand alone.  Each chapter is brought to you from the point-of- view of one of the main characters.  The book is also made up of many bite size chapters that tell a linear plot in a non-linear way.

“The Final Chapters”, which begins on July 14th, are a series of chapters that serve as a finale to the suspended-release novel.  You may use the index from the drop down menu to get background on the characters, read excerpts from the book, or the learn more about me.

Thank you for stopping by!  Read and Enjoy, A Better Pair of Shoes! 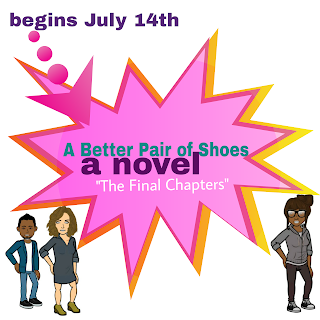