Again I found myself standing face-to-face with Evan, the pharmacist from a week earlier.  I had just pulled into a gas station a few blocks away from the University.  He held the door open for me to enter the adjoined mini mart.  I felt embarrassed that I had not taken a second look at his note, but it was no secret that I was married.
“You never called.”  Evan had no seeming shame, fear of rejection, or the slightest fear of losing his employment.
“I’m married.”
“I am too.  I thought we could just talk you know.”  He quickly replied, and I highly doubted those were his intentions.
“Right, well you never know what can happen.”  I took the liberty of teasing Evan.
“Well in that case, I’ll keep waiting by the phone.  He teased back.
I moved pass Evan, and went ahead to grab a cup of coffee and pay for my gas.

When I got home Tony wasn’t there.  I remembered the days he’d meet me for lunch or I would surprise him at home.  Sometimes he’d sit me down for a foot massage.  Those days however had come to a halt—mainly because I was cramming all my free time with work and study, but now especially because I didn’t want to be touched.   This day I had hoped he was there.  Maybe I just wanted to hear his deep logic, and his outlook on the world around him.  My heart won the battle and I called him up.
“Hey you.”  Except for his words, Tony expressed no delight.
“Hi there.”   I wasn’t exactly sure why I was calling Tony, but I remembered just a short while ago when I didn’t feel like I needed a reason.  I certainly had no record of ever receiving such a lackluster greeting.  It wasn’t the same Tony that had been pleading for forgiveness.  Maybe he was just having a rough day, but then surely my call should have brought some relief.
“Where are you?”
“… at the club…trying to catch up on some paperwork.  Can I call you back.”  Tony stated rather than asked.  I listened and wondered when I had become second to paperwork.  I didn’t understand why I wasn’t worth the disturbance.  Then I thought about Tony’s note, and him saying that he had a lot on his mind lately.  Funny, in my anger and disappointment, I hadn’t even really paid much attention to it.  I just figured that was the thing to say or that it went well with the rest of the story.
“Okay, I’ll talk to you later.”  I hung up the phone and lay on my guest bed on the verge of tears.  I didn’t know exactly what all was going on, but at the end of the call; I was more angry, more hurt, and more disappointed.  I hopped off the bed and began searching through all the things that were still littering the floor around the bed, looking for the piece of paper with Evans’ number.  I wanted to feel desired, and I wanted to be the center of someone’s attention.  This was something my ego had gotten used to since my days at the club, and it was something that I still needed.  I found the crumpled piece of paper hiding behind one foot of the bed and opened it up to Evan’s sloppy writing.  I punched the first three numbers into my cellphone and stopped.  What am I doing?  I punched in the last four numbers, and I hit talk without another thought.
“Hello Mrs. Santious.”  Evan reminded me that I was married.
“Are you happy?”  I asked sarcastically
“Very!  How about you?”  Evan’s question went beyond the surface and had left me mute.”
“You don’t have to answer that.”  Evan quickly withdrew his question.
“I noticed you don’t wear a wedding ring.  Why is that?”  I asked.
“I’ve been separated for almost a year and I’m back on the market so…”
“So it’s final huh?”
“Yeah we tried.  It just didn’t work.”
“So you just assume that nobody else’s marriage will?”  I took a strait shot at Evan.
“I really didn’t have to assume much.”  Evan shot back.
“So what is it you thought we would talk about?”  I was ready to hang up.
“I don’t know—maybe married life.”
“That’s the last thing I would want to talk about.”
“Okay what about work?  What do you do?”
“I’m a professor.”
“Of?”  Evan was determined to pull me from my shell.
“English.”  I answered halfheartedly.
“Do you enjoy it?”
“I do.”
“So what do you do for fun?”
“Not much lately.”
“You’re too young and beautiful to be so unhappy.  Why are you settling?”
“A month ago I wasn’t settling, nor was I unhappy.”
“So what did he have to say?”
“About what?”  I tried to keep up with Evan’s exhausting line of questioning.
“The infection.”  Evan asked with no refrain.
“Sorry.”  I responded.
“Do you really think he’s sorry?”  Evan question appeared to be a rhetorical one.
“I don’t know; you might know better.  What do you think?  I pretty much made the statement…“all men are dogs”.
“Do you really believe that?”
“What?”
“That all men are the same?”
“From my experience I’d have to say yes.”
“Well aren’t you the common denominator in all of your experiences.”  Evan stated so matter-of-factly and with no sensitivity.  “No wonder it didn’t work.”  I thought of his marriage.
“So why didn’t your marriage last ‘Oh Wise One’?”  I asked and Evan exploded with laughter.
“Look I’m not saying I know everything.”
“Obviously you don’t.”
“It could have, but I wasn’t happy.  I wanted to slow down, have some kids but she wasn’t ready.”
“So you left?”
“I value my happiness.”  Evan’s callousness continued to rub me wrong.
“Are you always so cut and dry?”
“You mean honest.  Yes I’m always this way.”  Evan was somewhat alluring.
“So then let me ask you this.  What do you want from me?”
“I’d like to take you out—show you a good time.”
“What about the fact that I’m a married woman?”  I was really asking myself.
“Okay let’s make a deal; no sex, no touching, no kissing; just pure fun.”  Evan quickly offered.  I thought for a few moments, and found myself surrendering to his offer. I didn’t know exactly where I would fit fun into my crazy schedule but I answered… 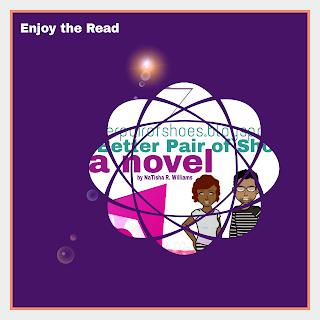