Chapter 4 and 5, Kayla Returns the Favor and Aisha's Drive Home

I heard Camie’s ring tone, and quickly dug my cellphone out of my purse.  I was surprised to hear the ringer that had become somewhat infrequent.  Camie was still my best girlfriend, but my getting married had somehow come between us.
“Hey Camie!!  What’s up?”
“Hey.  You busy?”  Camie sounded quite distraught and obviously didn’t care to waste any time getting to the point of her call.
“No, not exactly.”
“Well, I just needed to ask your advice on something.”
“Sure.  What is it?”
“There’s something I need to share with you first—something that I’ve been keeping.”
“You!  You never hide anything.”  I said, knowing how open Camie had always been with me; mainly about her many sexual delights.  What could be more worth hiding than that?
“Well, I have…and it’s really big, but I hope you can forgive me.”  Camie spoke with so much disappointment in her voice.  It was not like her.  She was always up and I was the one who was usually down.  I didn’t know how to wear her hat—and it scared me.  What if I didn’t say the right things or couldn’t offer the same understanding she did.  I had no idea what she was going to tell me, but I was awfully nervous.  In anticipation of the unknown, I quickly closed my office door.

I sat in silence for a few moments after Camie had dragged her skeleton out of the closet.  I tried to put myself in her shoes and say something similar to the kind of thing I would have wanted to hear, but I couldn’t seem to put the words together.  Eventually, I heard myself mutter “wow”.   This was obviously a hat I had never bothered to try on, and surely there was a good reason why; it just didn’t fit.  Still searching for the right set of words, I then heard myself offer to drive to .  I mean if there was a friend who would do it for me, this was that friend.  In fact I was certain I was indebted to Camie— after all the late night phone calls I had made to her over the years.  Not to mention, I’d never even bothered to ask if she had company, and she never made it a point to enlighten me.  Camie had been a rock solid friend, and now it was my turn to return the favor.  I wasn’t sure why I was going to Tampa to do it but it was a commitment my awkwardness had gotten me into, and I didn’t dare back out.  Besides, Camie was already praising me, and telling me how great it would be for me to meet and get to know Hannah.

I found myself sitting in my mother’s driveway more than thirty miles away from my house.  It was a place I hardly saw as a refuge; my mother was not a comforting type of person but this was where the road had led me.  I didn’t bother to call any of my girlfriends because I knew they would try to solve it— give me all kinds of advice.  At least I knew the most my mother would say was, “I told you so”.  I surely didn’t want Kayla to know; it would only confirm her fears, and I knew she wouldn’t be objective or impartial.  I sat there for nearly fifteen minutes with my hand on my head wondering if this was a can of worms I really wanted to open.  It was still early enough for me to drive back home and pretend everything was fine.  If I chose this hand, by morning everyone in my family would know of my troubles— my mother was supportive that way.

I thought about it one last time and slowly began backing out of the driveway; praying not to be seen or heard.  On the way home, I could feel my anger building, and it was slowly overshadowing my broken heart.  I simply wanted to walk up to my husband and slap the lies out of him.  I wanted to embarrass him to way he did me.  Mostly, I wanted him to plead and beg for me not to put his ass out.  I wanted him to see the no shit taking side of me, and beg for mercy.  For the remainder of the drive I thought about all the ways to satisfy my anger.

By the time I arrived home, my anger was slowly fading, and the love I held for Tony had resurfaced.  I was again strained with the decision of what to do.  I hid my prescription bag in my workbag, and pulled into the two car garage where Tony’s car was already parked.  I turned the engine off, and sat there trying to fight back a river of tears.  I knew that Tony had heard me pulling in and would eventually come looking if he didn’t see me soon after, so I hurried to pull it together.  I didn’t know how my emotions would sway upon seeing him, but I quickly looked up into the air—as if to say, “God, help me” and then took a huge deep breath.  I walked into the living room where the TV was playing but wasn’t being watched.  I heard Tony in the kitchen, and quickly yelled out, “I’m home” while heading straight for the bedroom.  At the top of the stairs, I listened to make sure Tony was still in the kitchen, and I quickly rushed to find a place for my meds.  I couldn’t help but wonder why I was foolishly carrying all the shame; why I was the one hiding and avoiding the issue.  Did part of me honestly believe I could have somehow gotten this on my own?  Why couldn’t I confront Tony the way I had done when I needed to with men in the past?  Maybe I had never truly been in love before, or maybe it was the dreaded thought of failure.   I just didn’t want to be wrong about Tony; about the love we shared; the love I believed we shared.  How could my heart lead me in the wrong direction?  I had always been told to follow my heart and I did.  So why was I here?  Had “they” been wrong all along?  Was it our heads we should have been following?

I took a long shower and then went right to bed without anything to eat.  I heard Tony coming up the stairs and I pretended to be sleeping.  I felt his gentle kiss on my forehead and heard the words “I Love You” come from his lips, and I forced myself to keep my eyes closed.  As he left the room, I felt the tears spilling out from my tightly shut eyes.  Yet, I stayed quiet and still for hours while my mind lingered and wandered all over the place.  I could hear my cellphone ringing but I never budged.  Once Tony left for work, I jumped up and frantically got dressed.  I drove twenty-five minutes to Sax, still not quite sure what I was hoping to find.  I pulled up on the opposite side of the street and easily spotted Tony’s car in the not-yet-crowded parking lot.  I sat there feeling a bit of deja vu, thinking that this was not the first time I had been in this situation; stalking the man I was in relationship with.  I had vowed never to do it again, but it wasn’t that simple; this time I was wife and he was husband.  I sat for nearly an hour feeling like nineteen all over again.  Eventually, I convinced myself that my actions were lame, and I decided to head back home.  On the way back, in an effort to disrupt my thoughts, I remembered to check the messages on my cellphone.
“First message, from ‘Kayla’; Hey Aisha, I’m calling to see if you want to drive with me to Tampa to meet up with Camie.  She got some family drama and she needs the support.  Second message, from ‘Kayla’; Hey Aisha, still haven’t heard back from you.  Where you at?  Anyway, I’m leaving first thing in the morning, so if you want to go, meet me at my place by seven. Later!  Love you!”

I thought about the word “drama” as I continued my journey home and how it had reared its head in my life; now Camie’s?  Honestly, it was quite rare to hear Camie’s name mentioned alongside the infamous word, but I guess no one was exempted.  I really couldn’t imagine going anywhere to console anyone when I was the one who needed consoling.  It just didn’t seem logical.

I got back home and climbed into bed with my clothes on.  About an hour later, I jumped up, started throwing things into a large sports bag, ditched my cellphone, and headed over to Kayla and Wood’s place without even a phone call to her or my husband.  It was somewhat of an outer body experience.  I felt as though I had been put on a need to know basis, or as if my life had gone on without me.  I had no predictions or expectations.

At Kayla’s, I knocked loudly as if they were expecting me.  I hadn’t determined what explanation I would give for my late unexpected visit nor did I really care to.  I was not in a rational state; my body was hot; my eyes were blood shot; my mind was vacant or maybe vacationing.  I was standing there in physical form and none else.

“Who is it?”  I could hear Wood’s voice.
“Aisha” I responded nonchalantly.  I saw the sliding peephole open and then closed and my entrance was granted.
“Hey Aisha.  So, you’re taking the ride with Kayla in the morning.”  Wood talked as he walked back into the bedroom.  I didn’t follow behind him.  I just stood next to the door with my bag in my hand.  A few moments later, Kayla came out and seemed to instantly notice my condition.
“Aisha, you okay?  You look like hell.  What happened to you?”
“You said he would.  You told me, but I wouldn’t listen.”
I watched as disappointment flooded Kayla’s face.  I was wrong.  She didn’t want to be right; she had no desire in saying “I told you so”.  Instead Kayla didn’t utter a single word, but opened up her arms and pulled me in.  Shortly after, I heard a gentle whisper, “I’m sorry.”


A stream of tears followed. 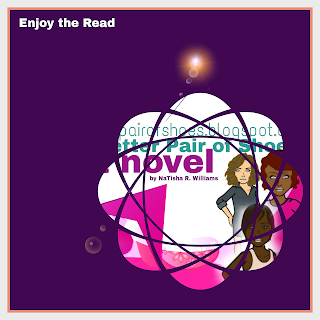